The campaign leading to the just ended general elections in Ghana was one marked by the making of several claims, counter claims and allegations by the various political contenders. The Media Foundation for West Africa (MFWA) found that about 28% of the claims its fact-checking team examined were false. A further 25% of these claims were found to be either half-truths or misleading.

MFWA’s fact-checking of claims made by major stakeholders in the electoral process helped to promote issues-based and fact-based campaigning. This was an improvement from previous elections when claims by contending parties often passed unchecked and thus inured to the benefit of those who peddled false claims and half-truths.

The project team fact-checked a total of 98 claims made by different key personalities. A summary of the verdicts of these claims is presented below:

This report also features an analysis of which political party was more truthful or factual in their campaign claims. Out of the 98 claims that were fact-checked by the MFWA’s team, majority of these were made by personalities from the National Democratic Congress (41) and the New Patriotic Party (37). Claims by the flagbearers of the People’s National Convention (7), Convention People’s Party (6), and the Progressive People’s Party (3) were also examined. Four claims by an independent presidential candidate were also fact-checked.

Overall, persons belonging to the NDC party made fewer false claims (6 out of 41) as compared to those of the NPP (11 out of 37), for instance. The full breakdown is provided below: 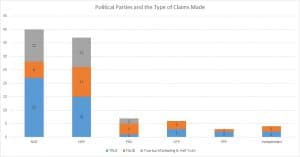 Below are the 98 claims that have been fact-checked and the verdicts presented per claimants.

Twenty four (24) claims by President John Dramani Mahama, the flagbearer of the NDC for the 2016 elections were fact-checked:

Nineteen (19) claims made by Dr. Mahamudu Bawumia, the vice-presidential candidate of the NPP fact-checked:

Eight (8) claims made by Hon. Fiifi Fiavi Kwetey, the Minister of Transport fact-checked:

One (1) claim made by Hon. Nana Oye Lithur, the Minister for Gender, Children and Social Protection during the official launch of the NDC Manifesto on September 17, 2016 in Sunyani fact-checked:

Three (3) claims made by Hon. Alban Bagbin, the Majority Leader in Parliament during the official launch of the NDC Manifesto on September 17, 2016 in Sunyani fact-checked:

Four (4) claims made by Mr. Boakye Agyarko, the Campaign Policy Advisor of the NPP during a press conference held on September 17, 2016 fact-checked:

One (1) claim made by H.E. John Agyekum Kufuor, the former president of Ghana was fact-checked:

Two (2) claims made by Alan Kyeremateng, a senior member of the NPP campaign team and a former minister of state were fact-checked:

Five (5) claims made by Dr. Omane Boamah, the Minister for Communications were also examined:

Read the full reports with the bases for the conclusions/verdicts on all the 98 claims fact-checked so far by visiting www.fact-checkghana.com.

We love feedback.
While you're here, kindly tell us how we can improve on our reports.

COVID-19 vaccination: Sammy Gyamfi’s use of WHO’s data on side effects misleading

Be the first to receive new reports. Subscribe to our newsletter