False! Health Minister Has Not Expressed Appreciation to John Mahama for UGMC

The page in the post attributed the following quote to the minister: 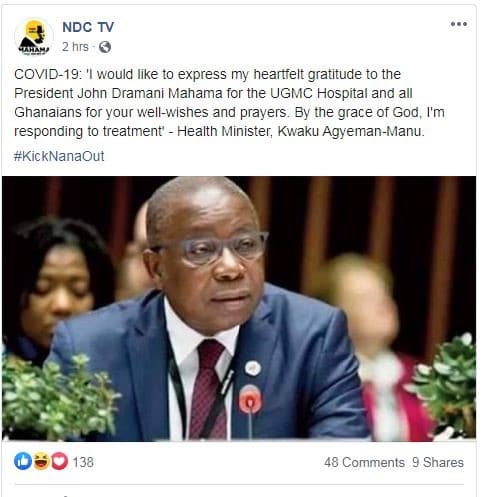 “I would like to express my heartfelt gratitude to the [sic] President John Dramani Mahama for the UGMC Hospital and all Ghanaians for your well-wishes and prayers. By the grace of God, I’m responding to treatment.”

Fact-checkghana.com finds this claim to be false.

Explanation: Ghana’s President, Nana Akufo-Addo in his 11th televised addressed on Sunday, June 14, 2020 confirmed that the Minister of Health, Kwaku Agyeman Manu, had contracted COVID-19 in the line of duty and was currently receiving treatment.

The center, which is Ghana’s first quaternary medical center, is among the facilities designated for the treatment of COVID-19 cases in Ghana.

The claim that the minister appreciated former president John Mahama for UGMC stems from the long-standing debate between the New Patriotic Party (NPP) and the National Democratic Congress (NDC) on infrastructure projects such as the UGMC and who should be credited with such projects.

The post reads, “I would like to express my heartfelt gratitude to the President and all Ghanaians for your well wishes and prayers. By the grace of God, I’m responding to treatment.”

Comparing the claim to the actual post, we find that NDC TV affixed “John Mahama for the UGMC” into the minister’s post to create the wrong impression of him appreciating former president John Mahama for UGMC, where he was receiving treatment.

Fact-checkghana.com therefore finds the claim to be false.

We love feedback.
While you're here, kindly tell us how we can improve on our reports.

COVID-19 vaccination: Sammy Gyamfi’s use of WHO’s data on side effects misleading

Be the first to receive new reports. Subscribe to our newsletter